We're all one race, the human race! 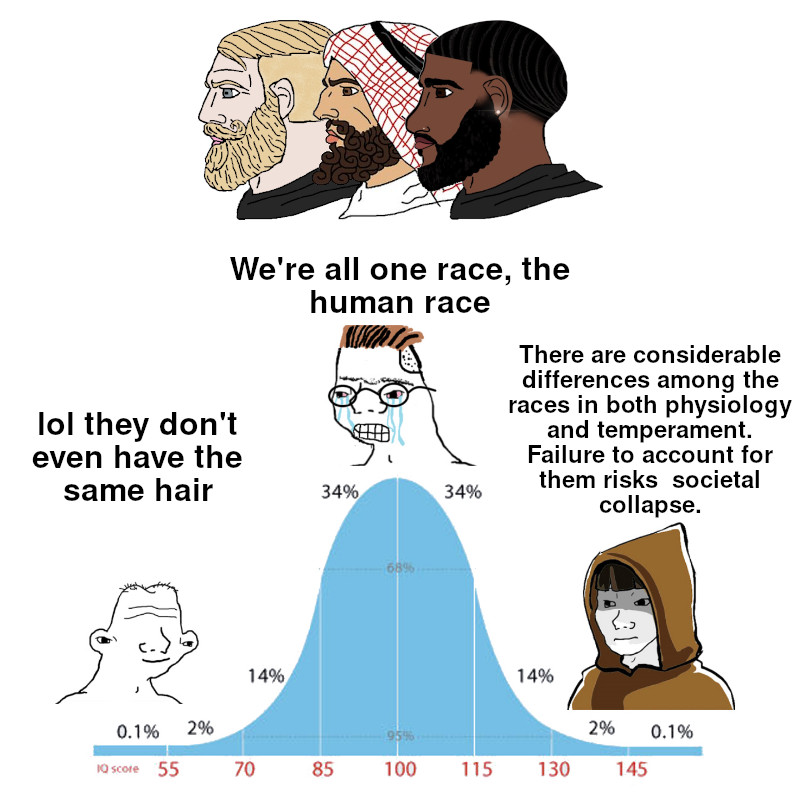 Well it’s that time of year again. We’re now being subjected to the second round of a fake and gay holiday that hardly anyone had even heard of let alone cared about just two years ago, yet is now a federal holiday. I suppose it’s an ok consolation prize for not being able to celebrate Father’s Day, but if you can’t beat ’em, join ’em, so let’s honor the unceasing request of every mainstream media pundit and Twitter blue check and actually have a “serious discussion about race in this country”.

But before we can begin talking about race, there are some to whom we must prove that it even exists at all. Even the eminent E. Michael Jones, redpilled as he is on the evils of organized international Jewry, inexplicably becomes a sniveling midwit when confronted with the topic, claiming that “race is a category of the mind” as though the concept has absolutely no bearing on reality at all. I frankly don’t know what else to call this but the basest nominalism; if the differences between the races do not warrant categorization into separate groups, then what does? A pencil and a trebuchet are both made of wood, yet none but the most die-hard materialist would dare argue they are the same. Thuletide has written an excellent series deboonking all the most common denialist arguments on his blog, but essentially what the “‘all one race” argument boils down to is “we’re all one category, the super-category.” It denies the very real diversity that God created for a reason, even on the national level (Italians aren’t Germans), supplanting it with a Satanic lie that is fundamentally an attack on His creation. This isn’t even about whether one is any better than the others, but all a race really is is the next-largest bloodline after the human race as a whole. There are very real differences and inequalities between them, to be sure, but acknowledging this is not hatred. Race is not made up, it’s not a “system of oppression”, and it’s definitely not just skin color. It’s extended family.

This is precisely why race matters. There can be no more effective bond for a society than the natural brotherhood that arises within an ethnically homogeneous group. And on the other hand, no matter how leftist academics attempt to distort the data, it is empirically clear that diversity destroys trust in a community, even accounting for every other variable you could possibly think of. Now some might chalk this up to differences in culture, claiming that biological race is irrelevant and these groups all just need to assimilate into one big melting pot, but this is a woefully myopic worldview. The most obvious problem with this is, how do you convince millions of people, especially those whose culture is built on gang violence and “kill Whitey” to just abandon that culture and become good little white picket fence Americans like you and me? Even for the more decent ones, they still have a distinct culture and identity of their own, just because some Americans like to pretend they have none why would they want to give up theirs? Even for the European immigrants from Germany, Ireland, Italy, etc in the 19th Century, the road to assimilation was a long and difficult path, and that was with relatively similar cultures. It just ain’t happening. Race and culture are two sides of the same coin, and their diversity, when allowed to live in their own homelands rather than jumbled all together, is in fact something good and worthy of preserving.

As simple as it sounds, even acknowledging that the races are different is now so taboo that it can even get you fired from your job. It’s no accident that the “support the current thing” crowd has been supporting “civil rights” along with every other degenerate Satanic movement in existence, even from its inception. There are a few reasons for this, one is that in attacking such a basic property of a man’s birth Satan is attacking human nature as a whole and thus subverting God’s creation, which is integral to his evil agenda. By promoting the lie of equality, Satan erases our different natural talents and weaknesses, leaving us with nothing special to offer God or our neighbors, instead being perfect little cogs to fit right into his machine as slaves. Another is the unique role to which God has evidently assigned our race in the evangelization and conversion of the rest of the world. While many wrongs were admittedly committed along the way, and unfortunately it was not always the full Truth of God’s Word that was preached, Western colonialism brought millions of souls to Christ that would have otherwise been lost, and has been used as an instrument of God’s mercy to continue the work of redeeming the world. It is for these two reasons that “abolishing Whiteness” is so central to the enemy’s plan, and another reason why we must resist this obvious attempt at extermination.

As should be clear by now, none of this has anything to do with hatred, but everything to do with love. Love for one’s own people, united in the kinship that can only exist between true brethren, free to live together in their own homeland as God and nature intended. Though other races may be more prone to indulge in unsavory behavior, we must remember that they are still created in the image and likeness of God, it was only through our Faith that we were ever able to reach the heights of what was really a reflection of God’s glory, and it is our duty to do what we can to help them come to know their Creator. That absolutely does not entail subverting our own existence as a people, whatever “Catholic” Charities thinks, but the point stands. “Much will be asked of the man to whom much has been given; more will be expected of him, because he was entrusted with more.” - Luke 12:48